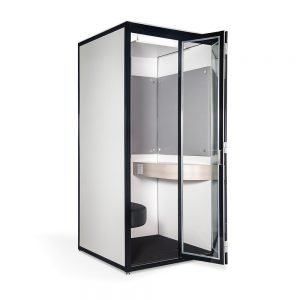 LOS ANGELES, CA – Cubicall, a custom phone booth manufacturer based in Los Angeles, is set to continue its growth as they appear on the tenth season of ABC’s “Shark Tank”. In front of a national TV audience, brothers and co-founders Anthony and Nick Pucci will attempt to impress the Sharks with their efficient privacy solution that addresses the shortcomings of open-office design. To learn more about Cubicall click here.

“Having the chance to pitch proven business experts and investors on the tenth season of Shark Tank is a once-in-a-lifetime opportunity,” said Anthony Pucci, co-founder of Cubicall. “We’ve come a long way since creating a phone booth out of personal necessity two years ago. We’re now in a position to sell the Sharks on our unique value proposition – and we’re confident they’ll see the market opportunity.”

Open-office floor plans represent 70-80% of offices around the world. While the modern design became popular due to its perceived benefits, recent research into the trend has revealed its shortcomings, namely employees are less productive, unhappy with their work environment, and disengaged.

Cubicall brings productivity back to modern offices through phone booths that deliver visual and acoustical privacy – offering employees a space to focus, hold private communications, or break from the distractions of open office design.

“We started this company when we created our own solution to the problems we experienced when working in an open office,” explains Nick Pucci, Cubicall co-founder. “After selling two phone booths the very first weekend we put our phone booths online, we knew we weren’t alone with our frustrations.”

Having launched Cubicall in 2017, market potential was quickly realized with the two brothers began selling Fortune 500 companies, including: IBM, SAP, Lyft, and Cisco; along with educational institutions like the University of Wisconsin Madison. The phone booths have been featured on Fox Business Channel, The New York Times, Interior Design, Fast Company, Inc. and was called “an efficient privacy solution to open-plan distractions” by Forbes.

Cubicall’s simple and efficient design aligns with today’s modern design trends. The phone booths ship flat, are easily assembled and are Made in Los Angeles. The bifold door allows Cubicall to fit into offices where every inch of space is critical and helps more businesses comply with International Building Codes. Cubicall’s unique design allows for the customization of the phone booth to match an organization’s branding, office style or communicate a marketing message.

“My brother and I have been Shark Tank fans since season one,” says Nick Pucci. “Getting a chance to pitch the Sharks is really a dream come true and we believe we have a good shot at making a deal.”

About Cubicall:
Cubicall produces efficient and customizable privacy solutions. Cubicall phone booths offer visual, acoustical, territorial and informational privacy through modern design. The phone booths ship flat, are easily assembled/disassembled, and are fully customizable. The bi-fold door allows Cubicall to fit into areas where every inch of space is critical and helps more businesses comply with International Building Codes. The company was founded by two brothers who came up with the idea when working in an open office space. The phone booths have been featured on Fox Business Channel, The New York Times, Interior Design, Fast Company, Inc. and was called the “an efficient privacy solution to open-plan distractions” by Forbes. Cubicall is designed, engineered and manufactured in the USA and is based in Los Angeles, California.