Cubicall, a custom manufacturer of phone booths for offices, to release phone booth edition inspired by the comedy cult classic in honor of the 30th anniversary and release of Bill and Ted 3 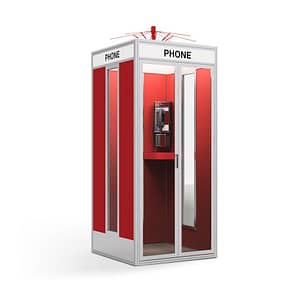 Los Angeles, Calif. – Announced this past Sunday on Bill and Ted Day, Cubicall, a manufacturer of modern phone booths, have announced their latest edition – a meticulous recreation of the time-travelling phone booth from Bill and Ted’s Excellent Adventure. The announcement coincides with the 30th anniversary of the comedy cult classic, which earlier this year, announced production would begin on Bill and Ted 3, with original writers and actors Keanu Reeves and Alex Winter reprising their roles. To learn more about Bill & Ted’s Excellent Phone Booth click here.

“As life-long fans of the movies, we’re really excited to bring this piece of movie history to life in time for Bill and Ted 3,” said Anthony Pucci, co-founder of Cubicall. “Not only will the booth feature the same great benefits of Cubicall phone booths, but we have some fun throwbacks planned like a retro-fitted pay phone.”

The limited-edition phone booth, which offers privacy for open offices and public spaces, is sure to transport fans back in time – even if it’s only psychologically. The recreated booth features an authentic payphone retrofitted for VOIP/landline service and umbrella time travel antenna.

Estimates show that open-office floor plans represent 70-80% of offices around the world. While the modern design became popular due to its perceived benefits, recent research into the trend has revealed its shortcomings, namely employees are less productive, unhappy with their work environment, and disengaged.

Cubicall brings productivity back to modern offices through phone booths that deliver visual and acoustical privacy – offering employees a space to focus, hold private communications, or break from the distractions of open office design. It is most tranquil.

Creative Licensing has brokered the deal.

Cubicall will begin taking orders for the Bill and Ted Excellent phone booth later this fall. For now, you can learn more and register your interest at https://www.cubicallbooth.com/bill-and-teds-phone-booth/.

About Cubicall:
Cubicall produces efficient and customizable privacy solutions. Cubicall phone booths offer visual, acoustical, territorial and informational privacy through modern design. The phone booths ship flat, are easily assembled/disassembled, and are fully customizable. The bi-fold door allows Cubicall to fit into areas where every inch of space is critical and helps more businesses comply with International Building Codes. The company was founded by two brothers who came up with the idea when working in an open office space. The phone booths have been featured on Fox Business Channel, The New York Times, Interior Design, Fast Company, Inc. and was called the “an efficient privacy solution to open-plan distractions” by Forbes. Cubicall is designed, engineered and manufactured in the USA and is based in Los Angeles, California.